The Victorian government recently announced that the $40 million package dedicated by Daniel Andrews to fund transition in the Latrobe Valley would be split, with money from the package now also going to Wellington and Baw Baw Shire.

Community group Voices of the Valley expressed disappointment and exasperation at this announcement, stating the that Latrobe Valley has been let down by the government, and are calling on Daniel Andrews to keep his promise that the $40 million is dedicated solely to economic transition in the Valley.

“When Daniel Andrews announced the $40 million package in April we were relieved that the Latrobe Valley was to receive real support for transition,” said Wendy Farmer, President of Voices of the Valley.

“It is very disappointing and exasperating to hear that the package dedicated to Latrobe Valley is now being split up. We are trying to transition a community who has lived through privatisation and now faces the imminent closure of Hazelwood. The Andrews government must keep their promise to the Latrobe Valley.”

The State government's decision to divide up the dedicated package was that some people who work in the Valley live in these areas. Farmer responded to this reasoning saying, “surrounding areas should be supported by the state government, but not at the expense of the Latrobe Valley community. The entire Gippsland community will benefit from a properly financially supported Latrobe Valley as it transitions from the coal industry, just as it has always benefitted from the presence of the power industry here.”

Voices of the Valley are calling on Daniel Andrews and Wade Noonan to commit the $40 million to the Latrobe Valley region, and to find the funding for Wellington and Baw Baw Shire from elsewhere.

The writing is on the wall for our traditional centralised grid power generation industries in the Latrobe Valley. We must begin to build a new set of industries that will grow even as our old industrial base for jobs declines.

(Note:* the timeline may not be accurate - but the effect is the same)

We at VOTV have been proactively seeking a new path for the region and a way to futureproof the jobs for our children. Whilst we do not dismiss or discourage the push towards food, fibre and other industries we feel that is well in hand with the local Shire (council) EDO plans etc, we are looking from a different and community perspective....

The Grid itself has transitioned and so must we. 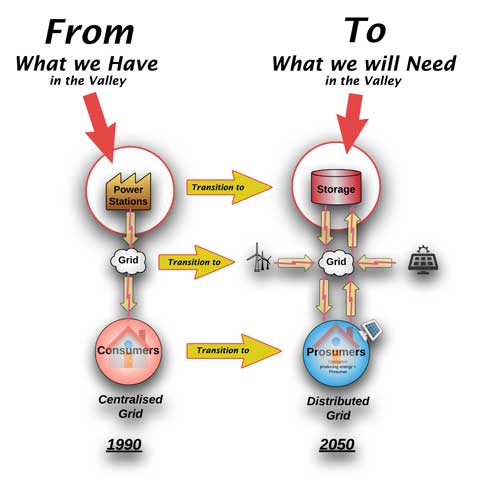 “Our children will have jobs that don’t exist yet.”

The elephant in the room when it comes to the health and wellbeing of the people in the Latrobe Valley is hope - jobs and hope.

The jobs we had, and those our fathers had have been sold from under us; traded for city freeways and subsidized tollways. The hospitals we built with our social club moneys and cake stalls were sold off and privatised.

The jobs did not return.

It’s highly probable that in 30 years (or sooner) there will be no coal burning power generation in the valley as the last of the stations reach their end of life cycle, become unviable and are not replaced.

The jobs lost during privatisation were much more than those of the power industry and local retail. The local university used to train engineers that were specialists in power stations needs. The TAFE and secondary technical school systems were geared towards producing technicians and tradesmen for the power industry’s required skillsets, the education was symbiotic with the industry The education system provided the basic skillsets, the industry provided the education system with experienced instructors.

Whilst many of the individual skillsets have been lost and the industry demand decimated, the infrastructure required to disseminate a range of skillsets still remains and could be quickened.

They may be rebadged and defunded but they still exist. What is stopping the educational institutions from flourishing is a lack of local market for applied skillsets and the paucity of opportunities in local industries for students to gain practical experience through work experience, holiday work and internships.

We need to look at what can be done to bring forth another self sustaining, symbiotic market for unique skillsets, in the same manner as the generation industry and associated workshops of the SEC worked with the local educators.

To do this we need a set of new and unique industries. Ones that fit in with the traditional heavy industry base and requires minimal infrastructure modification.

This would require industry sets that were emerging and therefore the skillsets could be learnt by doing and then taught on.

Industries whose skillsets were saleable, with a wide application to the future, fundable at state and federal level and beneficial enough for local industry to engage in its development.

We at VotV believe those industries lie in the new energies field.

It is a legacy of our centralised generation grid heritage that all power lines lead to the valley, even the one from Tasmania comes through the Latrobe Valley

The Valley is an ideal spot for storage and conditioning to to take place, to build an industry around enabling, stabilising, installing, maintenance and control systems for the distributed grid.

The Valley is in a good position to design and build products for that purpose and research and educate in the aspects of it. 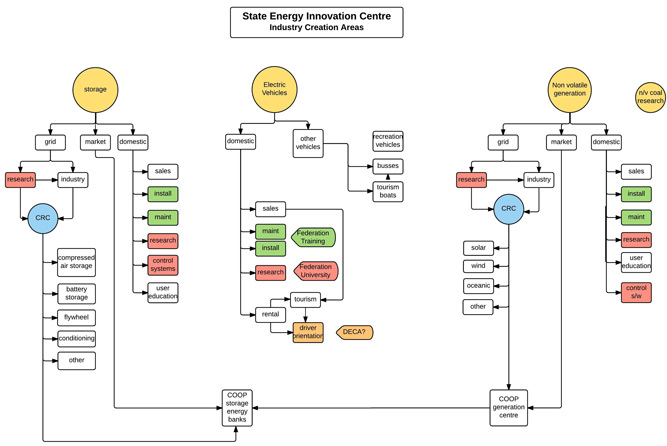 These are some immediately visible growth areas and opportunities for training of trades people.

Tradies are our lifeblood, the heart of industry.

New trades are evolving in the power industry

We have an opportunity to learn, teach and harvest them in the Valley.

We can build our own jobs.