At a community information session addressing the government budget announcement last month, the advocacy group, borne out of the Hazelwood mine fire, presented their concept for a 'State Energy Innovation Centre - A Power Industry Transitioning Plan for the Latrobe Valley'.

However, the Minister later denied a link between the advocacy group and the government's plan in an interview with The Express.

In the group's plan to change the culture of the region from electricity generators to 'electricity enablers' of a renewable energy grid, VOTV member and grassroots researcher Ron Ipsen talked about a tertiary education and trades' skills hub.

Using and expanding infrastructure and skills already a part of the region's landscape is also central to the group's answer in finding 'somewhere to transition to'.

Mr Ipsen even has an idea to recycle power station generators into 'synchronous condensers' - a device for alternating electricity transmission networks.

"All power lines lead to the Latrobe Valley; this is the ideal place to condition and store electricity and we've always seen that as a part of our role, it's just a different way," he said.

The third-generation power station worker employed at the former State Electricity Commission said he "loved" the power stations, but believed economics would kill the industry.

"We don't have to jump up and down to kill our power stations, they're dinosaurs; they will die anyway," Mr Ipsen said.

It was during the Hazelwood Mine Fire Inquiry that Mr Ipsen said he became aware of the 'elephant in the room' - the diminishing health of Latrobe Valley residents from high unemployment.

"We know our industry is dying and we want to utilise the infrastructure that we have and build something new that the community itself owns like the State Electricity Commission," Mr Ipsen said.

He believes future jobs in renewable energy were trades jobs, such as construction, installation, maintenance control and sales. Mr Ipsen indicated he had spoken with Gippsland TAFE, Federation Training about the proposed plan. 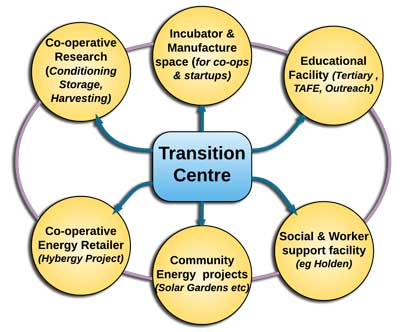