Quite a worrying trend on this graph given that Moe and surrounds were considered safe and the children were evacuated to here. It is also the place where the respite/refuge centre was set up.

One theory suggests that it is probable that this is caused by the bowl effect of the geography and toxins blowing eastwards were captured in the gap between the two mountain ranges, flowing downwards as they are heavier than air in the same way the water does to collect in the basin. Trapped by where the Divide meets the Strezlecki ranges at the lowest point, Moe and Lake Narracan. 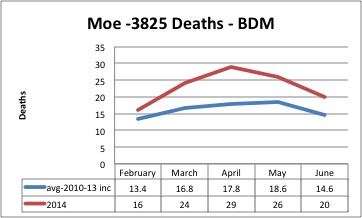